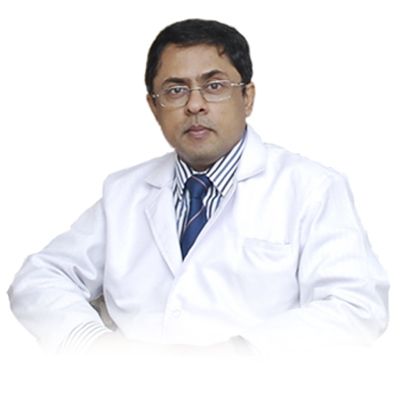 Graduate of Medical College, Chengalapattu, Madras University of 1986 Batch and took his Post Graduation in 1996 from Calicut Medical College. He worked as a Lecturer in ENT at Trichur Medical College from 1990 to 1994 and Assistant Professor at Medical College from 1994 to 1998. He is interested in Otoneurology, Otology, Head, and Neck Surgery. After joining the Malabar Institute of Medical Sciences in 2000, ... he was instrumental in starting the State’s first ever Cochlear Implant programme. He was trained in Cochlear Implantation in Bionic Ear Research Institute. He is renowned for performing the highest number of paediatric implantation.
Dr. Manoj is one of the third persons in India to be invited for the VISTA (Visiting Implant Specialist to Australia) seminar held in Melbourne and Sydney. He has presented papers at various conferences in India and abroad, notably at the SAARC Conference at Sri Lanka and International Cochlear Implant Conference at Spier, Cape Town, South Africa and Asia Pacific conference on Cochlear Implant and related Sciences at Hong Kong. He is an invited faculty for temporal bone dissection courses at various Institutes in the country, notably Madras ENT Institute and Research Foundation. Sree Ramchandran Medical College, Porur and Amritha Institute of Medical College at Kochi. He has performed Cochlear Implant Surgery on the youngest child to be implanted in India at 10 months. He is keenly interested in the treatment of vestibular disorders and surgical management of vertigo. He is a trained Microvascular Surgeon and has performed the first free flap microvascular anastomosis at Malabar Institute of Medical Sciences.
Dr. Manoj is the National Secretary of the Cochlear Implant Group of India and Organizing Chairman of the 2006 Annual Conference of the Cochlear Implant Group of India held at Calicut. His is also a keen Head and Neck Surgeon, having had special training at the Kidwai Memorial Institute of Oncology, Bangalore. He has a large series of Total and Partial Laryngectomies who have been effectively rehabilitated through Tracheo oesphageal Puncture. He was responsible for starting the State’s first Laryngectomy Club. Read more

Graduated from Medical College Calicut in 1991. She has specialized in the field of Physical Medicine and Rehabilitation from the same college. She worked in National Hospital, Calicut and later as Head of Department, Physical Medicine and Rehabilitation at Malabar Institute of Medical Sciences, Calicut (2001-2006). Her area of interest includes Cerebral Palsy and Pain Management. 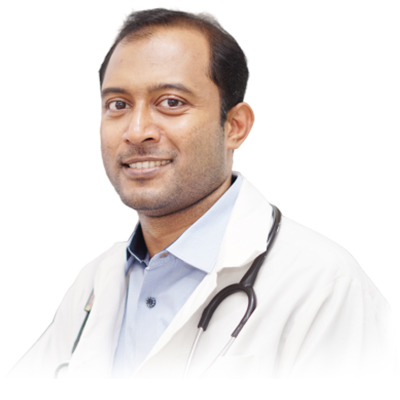 Dr Sandeep graduated (MBBS) from Govt. Medical College, Calicut in the year 2007. He has worked as NRHM medical officer at Govt. General Hospital Mattanur, Kannur in 2008 Dr Sandeep post graduated in ENT Head & Neck Surgery from the prestigious All India Institute of Medical Sciences (AIIMS), New Delhi in the year, 2012. Dr Sandeep has been working as consultant ENT surgeon at MESIARC, Calicut since March 2013. ... He is also a Diplomate from National board (DNB) in Otorhinolaryngology and a Member, National Academy of Medical Sciences, New Delhi. Dr Sandeep also holds the fellowship degree from International Federation of Head & Neck Oncologic Society (IFHNOS). Apart from all routine ENT surgeries, his areas of expertise include Endoscopic skull base surgery, Endoscopic sinus surgery, Head and neck, transoral laser (TOLS) surgery and Facial plastic surgery. Well trained in facial plastic surgery and Rhinoplasty, Dr Sandeep has been a faculty at national conferences and regional conferences. He also has publications in indexed journals to his credit. Read more 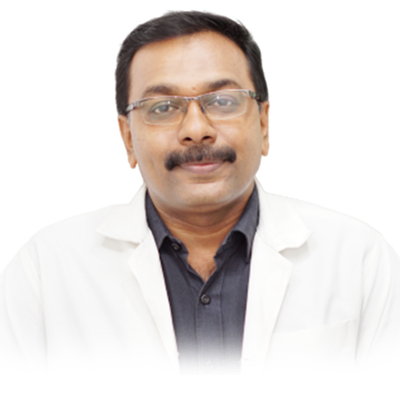 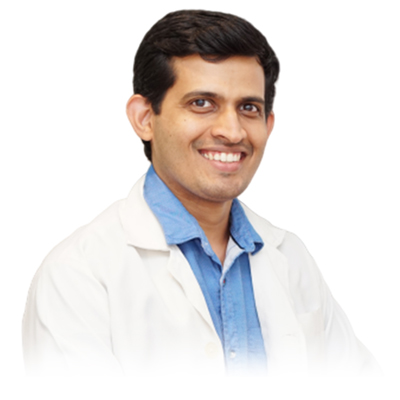 Completed his MBBS in 2008 and MS(ENT) in 2014 from Govt Medical college, Kozhikode. Joined MESIARC in March 2015.
His field of interest is Otology, Neurotology and Vertigo disorders. 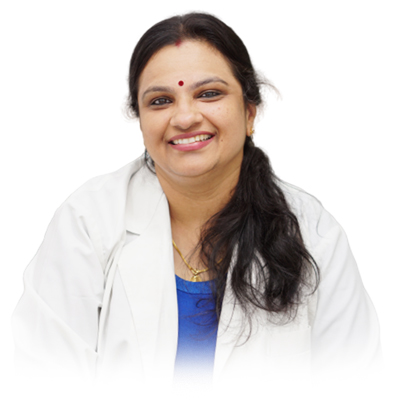 Dr. P Sangeetha has finished her diploma in otolaryngology from Trivandrum Medical College. She was working in EMS memorial medical college Perintalmanna as a junior consultant following which she joined MESIARC. She has a keen interest in singing voice disorders and head and neck ultrasound. ... She manages the ultrasound unit of MESIARC and with otolaryngological knowledge combined with experience adds a new dimension to our salivary gland unit. Ours is the only salivary gland unit in the country with this kind of support. She is also a professional trained singer with music albums to her credit. She has presented papers in head and neck ultrasound at state level meetings. Read more 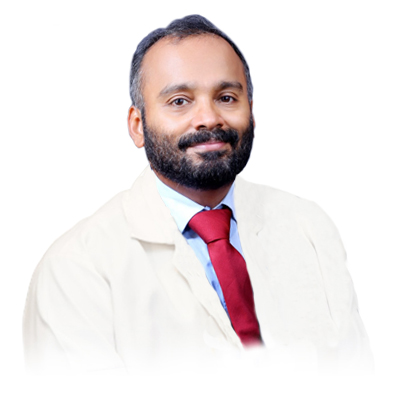 Specialist in Voice and Swallowing disorders

Dr Padmanabhan Kumar is a graduate of Trivandrum Medical College and Post Graduate from Kasturba Medical College, Mangalore. An outstanding academician, he has been a gold medallist in MBBS, M.S and at the National level in DNB.

He is passionate about voice disorders, specially voice disorders affecting professionals like teachers and singers. He has trained in Laryngology from Kerala's premier laryngologist, Dr. Jayakumar Menon.

His aim is to introduce scientific treatment of voice disorders and to raise awareness about voice preservation and voice modulation.

Sasidharan P obtained his graduation and post-graduation in Audiology & Speech Pathology from All India Institute of Speech & Hearing, Mysore, Karnataka, India in 1995. He worked as Assistant Professor in the Department of Audiology at Kasturba Medical College, Manipal and joined the present team in 1998. He underwent advanced training in Cochlear Implantation from the Bionic Ear Research & Training Institute, Melbourne, Australia, Medel Medical Electronics & Advanced Bionics. ... He has got wide experience in programming cochlear implants & optimizing hearing aid fitting. He is a member of the Indian Speech & Hearing Association, Rehabilitation Council of India, Cochlear Implant Group of India (CIGI) and “Hearring” (comprehensive hearing implant centres). He served as a member of the Advanced Bionics European Audiological Advisory Board from September 2011 to May 2014. He is the Managing Partner of Hear & Speak habilitation centre for the hearing impaired, Calicut, Kerala. He was actively involved in creating public awareness about the management of hearing impairment by conducting several public awareness camps across Kerala, along with his team. He played a prominent role in educating the professionals & public about the audiological services. His passion is Paediatric Audiology & Cochlear Implantation. He was the Chief Audiologist of Kerala’s first Cochlear Implant programme, which began in the year 2002 at Malabar Institute of Medical Sciences, Calicut. He is a co-author of some important publications related to cochlear implants. Read more 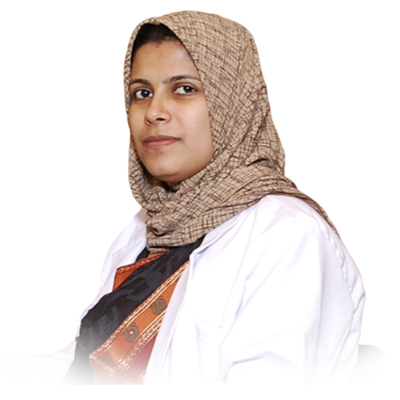 Mrs. Shabeena completed her post-graduation in Audiology and Speech pathology from Ali Yavar Jung National Institute for Hearing Handicapped, Mumbai in 1998. She underwent advanced training in Cochlear Implantation from the Bionic Ear Research and Training institute, Melbourne, Australia in 2004.Life member of cochlear implant group of India. She also underwent advanced training in paediatric hearing aid fitting in Switzerland in 2006. She has got several scientific papers to her credit. She is a life member of the Indian Speech and Hearing Association, Cochlear implant Group and Kerala Speech and Hearing Association.